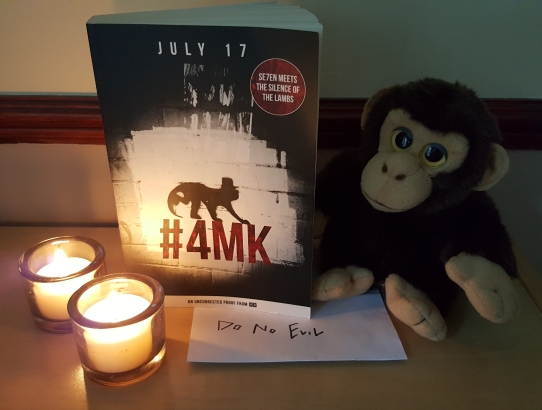 For over five years, the Four Monkey Killer has terrorized the residents of Chicago. When his body is found, the police quickly realize he was on his way to deliver one final message, one which proves he has taken another victim who may still be alive.

As the lead investigator on the 4MK task force, Detective Sam Porter knows even in death, the killer is far from finished. When he discovers a personal diary in the jacket pocket of the body, Porter finds himself caught up in the mind of a psychopath, unravelling a twisted history in hopes of finding one last girl, all while struggling with personal demons of his own.

With only a handful of clues, the elusive killer’s identity remains a mystery. Time is running out and the Four Monkey Killer taunts from beyond the grave in this masterfully written fast-paced thriller.

Holy moly! This was a bloody brilliant book. I hate saying ‘I couldn’t put it down’ because that phrase is so over used, but really, I could not put it down. This was a fantastic book and it has to be one of my most enjoyable thriller reads to date.

Firstly, it’s set in Chicago, which is my favourite place in the world. As soon as I see anything set in this glorious city I snatch it up. I loved the little titbits of Chicago history that J.D Barker slipped in now and again.

The characters and the interaction between them was superbly written. The witty lines that flow back and forth between Detective Sam Porter and his second in command, Nash, were so entertaining. Quite a few times I found myself chuckling. In fact, the whole Fourth Monkey investigation team had a wonderful vibe between them. J.D Barker manages to effortlessly bring his characters to life. I also adored the relationship between Nash and Clair, so much flirting and sexual tension gah, I loved it!

On the subject of characters, The Fourth Monkey killer has to up there with the best of the bad guys. He’s clever, slick, charming (in a serial killer kinda way) and of course, completely deranged. The book features diary extracts from his childhood and man, these diary entries are so morbidly addictive. They get more and more chilling the further into the book you get, they made the book for me.

I read this at a voracious speed, I was hungry to find what happens. There are so many twists and surprises that I couldn’t just read one more chapter. Dark, gruesome, twisted, fast paced and absolutely bloody brilliant, ‘The Fourth Monkey’ is a must-read thriller. And I cannot wait for the next instalment.

J.D Barker in the international best-selling author of ‘Forsaken’, a finalist for the Bram Stoker Award for Superior Achievement in a Debut Novel. In addition, he has been asked to co-author a prequel to ‘Dracula’ by the Stoker family. Barker splits his time between Englewood, Florida and Pittsburgh. 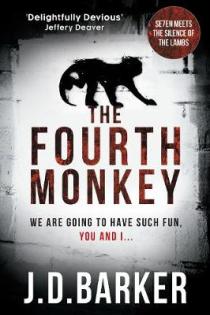 ‘The Fourth Monkey’ is out now in hardback published by HQ Stories. With a big thanks to the team at Harper Insider for my review copy.

If you enjoyed the depraved mind of ‘The Fourth Monkey’ then try these next:

‘An Evil Mind’ by Chris Carter